A decade back, long distance relationships would have been highly difficult, almost impossible. But today, with internet, they have high chances of being successful. Communication has become cheaper. For instance, VoIP, Voice over Internet Protocol, is an economical communication service through internet with both audio and video calls. VoIP has forced us to wave good bye to the phone services, especially with long distant calls.

Skype has been a popular VoIP since a long time. Viber is relatively new in the market. 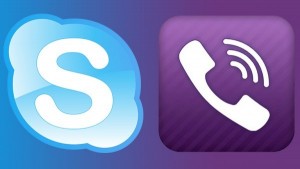 Both the applications are straight forward when it comes to installation and login. Skype requires a username and password, while viber is good to go with a mobile number. However, viber asks for a user name as a number identifier.

Recently viber is available for desktops too. If most of the work is to be done with a smart phone, viber is a better choice.

Both the apps are absolutely free. Both the applications do not charge their users for instant calls or messages. However, skype charges its users to make calls to landline and mobile numbers, one of the features that is so far missing in Viber.

With its peer – to – peer network, Skype has always provided admirable call qualities. Skype is unbeatable with its HD voice services and enhanced codes for both voice and video calls. On the other hand, Viber’s call quality is not as good. Viber video calling is still in the beta version and so expecting more than a decent call quality is not fair.

Skype is quite popular with its clear, free – calling video services. Currently usage of skype is five times as that of Viber. As, Viber is relatively new in the market, it is gaining its popularity.

The ease of use of Viber is much easier on the mobile phone than skype.  As Viber is designed for mobiles, users travelling a lot, business personalities may find Viber more useful and convenient. Skype has not satisfied mobile users comparatively.

Who can be called

Viber’s main drawback is that it allows users to only call contacts that are using Viber. But, skype allows its users to interact with the people using hotmail, msn, and Microsoft. Though, skype charges users for calling landlines, their charges are comparatively cheaper to that of the traditional landline rates.

Overall, Skype is a better app to opt for in case of huge use base. Viber is just few steps back and is great for mobile users with call quality decent enough to fulfil the needs.