A Japanese Researcher, Seokheun Choi from State University of New York has developed an inexpensive paper battery. The battery generates power from bacteria. 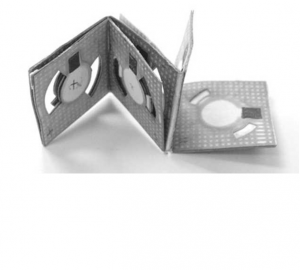 It can be used to run bio – sensors to diagnose diseases. The cost is $ 0.05 which is just Rs 3.20. The battery is named Origami (Japanese paper folding art) as it is foldable.

Cathode is Nickel and is sprayed to one side of the paper. Anode is carbon and is painted to the other side. The electrolyte used is the dirty water. Dirty water has organic matter in it. Bacteria strive on such organic matter. Bacterial respiration is the source of electrons. to know more about the concept visit link

Electrolyte acts as a path for the electrons to flow from anode to cathode in order to complete the circuit, when the battery is connected to a device.

The bacteria power the battery – How?

Bacteria strive on anaerobic respiration (respiration where oxygen is not used), which is an electron chain cycle. When the bacteria respire, they produce carbon dioxide, water and electron as by product. These electrons get a flow channel when the battery circuit closes.

You can easily understand the working of the battery from the following image. 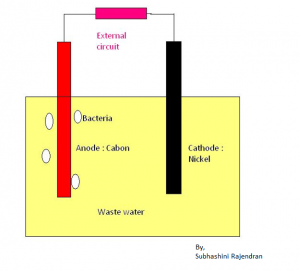 You can see that bacteria make the electrons available at the anode, where reduction takes place. Reduction is nothing but accepting electrons.

Read more about the batteries here

Origami batteries live till the bacteria live. Studies show that bacteria can survive at room temperatures for more than 100 years as they reproduce by simple cell division.

There have been many batteries generated in the past that operates on bio matter. However, their environment usages have always been challenging. There has to be constant in – flow and out – flow of waste water. This difficulty is overcome in Origami batteries.

The battery can be crushed to any form without affecting the circuit setup. The batteries can be stacked to generate high power.

The researcher has received a three – year grant of nearly $300,000 (Rs 1.8 crores) from the National Science Foundation, United States.

The main purpose of the grant from the foundation is to pair the technology of the origami batteries to hand – held devices. Especially, the target is on powering bio – sensors. The scientist proudly says that he has envisioned a self powered system that would create enough energy to the electronic systems running on micro wattages.